Yesterday,  today,  tomorrow.
The story of the store. 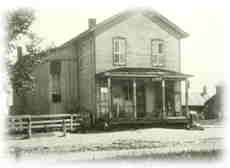 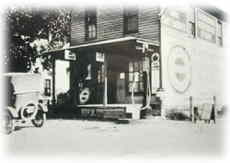 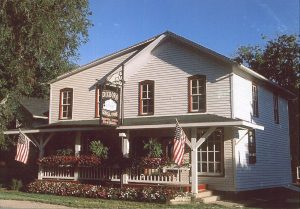 Nestled in small village just outside the bustling city of Ann Arbor, Michigan, the Dixboro General Store has long been a landmark to neighboring towns.

Built around 1840, seven years before the birth of Thomas Edison and nearly 20 years before the beginning of the Civil War, the store, which sold general merchandise, survived early on by trade with locals and voyagers traveling by horse and buggy on the narrow dirt road that it sat on. Our busy Plymouth road was once the main route connecting Detroit and Ann Arbor, taking a team of horses with a load of goods a minimum of three days.

The turn of the century brought changes to the Dixboro General Store, when the Dixboro post office operated within it from 1890 to 1905, and hair cuts were given in a small corner of the store. The upstairs of the building usually housed the merchants family who often entertained neighbors on the front porch with their guitars and fiddles. The east side of the current store which now houses our “bear room”, player piano and kitchen, was actually a separate house. This house was built shortly after the store and was later purchased by the store owner to move his family to after they outgrew the upstairs. Around 1915 and continuing for many years, the upstairs of the store was used as a Saturday night dance hall. The popular hardwood dance floor that was put in place in 1920’s is the same floor you walk on today.

In the 1920’s, the store owner installed a gas pump and sold gasoline for those fashionable Model T’s that replaced the four-legged transportation. It was also during that decade that an addition was put on the east side of the store, doubling it’s previous size, and convict labor paved Plymouth road to better accommodate those University of Michigan football fans!

The store thrived until World War II, where hard times forced its closing until 1947 when it reopened with a prosperous forecast. A small hot dog stand was even set out front to attract the many cars now traveling the popular Plymouth road.

In 1964 the store changed from general merchandise to antiques and remained an antique store until the 1980’s.

In 1990, Allan and Cheryl Goode purchased the dilapidated landmark with dreams of restoring the 150-year-old building and housing their successful country retail business there. It took them nearly a year to rejuvenate the historical structure, overhaul the barns and landscaping, fill the building with home accessories, and promote and advertise the new “Dixboro General Store”.  All the while, hoping that “if they built it, people would come.”

The most recent chapter began in 2007, when longtime employee Steve Dani, and his wife Brenda, purchased the store from the Goodes, with the hope of continuing the tradition of providing great service, great selection, and an experience that is truly memorable.

Come take one step over the threshold of this legendary building and enjoy taking several steps back in time.